Want to listen to put iTunes music on your Samsung Galaxy? Believe it or not, this is completely possible! Of course, directly connecting your Android device to iTunes is impossible. However, there are methods of doing so that we’ll be teaching you how to put music on Samsung Galaxy. This article should include all that there is that you need to know, along with a FAQ section for any possible unanswered questions that you might have. So, make sure to stick around till the end to learn all that you need to know!

The Samsung Galaxy series made waves in the market, and despite being significantly cheaper than its iOS counterparts, they are able to match up when it comes to design and quality. As a brand, they offer not just alternatives but actual competitive products that - more often than not - go above and beyond what even Apple is offering with their smartphones these days. Of course, it’s not just the builds that it has going for it. A Samsung phone has special features that might make one choose it over any other phone series in the market. Including the following:

Part 2. How to Put Music on Samsung Galaxy S9/S8/S7/S6/S5 from Computer(iTunes) with the Best Music Tool

If you want to put music on a Samsung Galaxy Phone, then the most convenient way of doing so is to use the iMusic data transfer software. This is compatible with both iOS and Android devices (of any generation.) However, you will have to set-up your Android devices at least once before you’ll be able to do any transfers. We’ll show you how to do that, as well as how the automatic transfers work! First, however, let’s go through a couple of this great program’s key features!

Tutorial to Put Music on Samsung Galaxy by iMusic

As mentioned, the first time that you connect your device with a program like iMusic, you will need to make sure that it is set-up properly. We start the set-up on the Settings > About Phone.There, you’ll find the “Software Information” option, which you will have to select in order to move forward. Next Click "Build number"- turn on" USB Debugging". 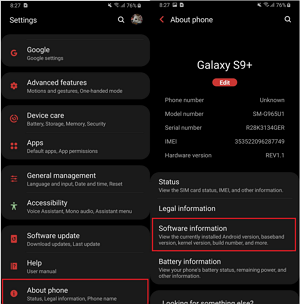 You’ll know that the set-up was successful if you launch the iMusic software and open up the DEVICE page and see this (refer to the image below.)

Note: If you are not seeing this screen, a list of instructions will be available for you to follow. 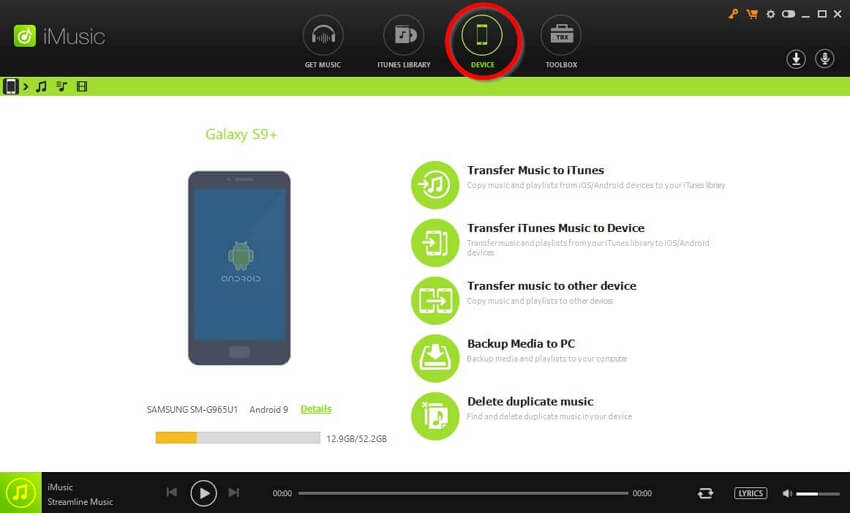 For this sample, we’re going to put iTunes Music on a Samsung Galaxy S9+ by selecting the Transfer iTunes Music to Device option.

The only thing left to do in order to complete the transfer is to select what you want to transfer. iMusic will offer you whatever option is available on your iTunes library (be it the “Entire Library” or select “Playlists” and “Albums.”

Press the Transfer button in order to copy selected music to your Samsung Galaxy.

This next part is also going to be a demonstration. Although, unlike the one before, we’re not going to be using a data transfer software. Instead, we’re going to make use of the available manual transfer method available on a Windows PC (this same method will not work on a Mac OSX unless you download a special program that will allow for it.) Of course, this is a FREE built-in feature, which is one right reason some might prefer it over other methods. However, as you’ll see in our step-by-step breakdown, it is actually pretty limited in some ways.

On Windows Explorer, you will need to move to the This PC tab (shown in the image below.) If you’re a regular user, then you know that this is where you can find the external drivers connected to your PC.

Once you are on there, select your Samsung device.

In order to proceed, you’re also going to have to make sure that you select Allow when this message (refer to the image below) pops up on your Samsung device.

Only when your PC has been allowed access will the Phone option be available under your device (as is shown in the image below.) If this is not showing on your device, disconnect and connect again so that you can select the “Allow” option.

Under the Phone folder, you will need to locate and select the “Music” folder, which is where the songs in your Samsung device are located.

Finally, whether you’re using music exported from iTunes or not, you will need to use the drag and drop method in order to put music on the “Music” folder of your Samsung device. Once the items have been transferred to your device “Music” folder, then you are done!

As was promised in the very beginning, here’s a quick 1 to 5 FAQ based on the most common questions people might have when it comes to transferring iTunes music onto your Samsung device! This, of course, will apply for whatever generation of the Galaxy that you are currently using. Whether it is one of the older ones or the newer ones!

1. Is it Possible to Automatically Sync iTunes to Samsung?

Although it is common knowledge, some people might be tempted to try to connect their Samsung device and launch the iTunes software — thinking that they will be able to sync the two together (as one would if it were an iOS device.) Unfortunately, this is impossible. The closest you can get to automatically syncing your iTunes library to Samsung is to use a product like iMusic, which acts as the bridge for the transfer of music and other media.

2. How About Manual Transfer on a Mac OS PC?

Again, still impossible. In fact, you’re going to have a really difficult time accessing even just your Samsung’s storage on your Mac OS PC. Apple and Samsung are rivals after all, and Apple is good at making sure that it gives you all the possible reasons they can to make sure that you choose their product over others.

3. Can You Transfer DRM Music to Samsung?

iTunes DRM is heavily protected, and more often than not, you’re going to have a really tough time transferring it anywhere. As such, you won’t be able to listen to any of your DRM music — even if you chose to opt for the Manual transfer with a Windows PC. There are certain tools that can help circumvent this, but it is technically impossible.

4. Any Differences Between Generations?

That will depend on what method you are using in order to transfer your music. If it is something like iMusic — which is compatible with all the relevant phone series (Android or otherwise) then you should be fine. However, you might want to watch out for certain programs who prioritize only newer devices — or worse, who have not been updated in so long that it works only for older models.

Is it possible to transfer playlists on a Samsung Galaxy phone? Well, yes and no. Again, it will depend on the method of transfer that you are using. For this particular issue, we recommend iMusic as a solution. As not only can it transfer all relevant media for you, but it can also be used in order to move playlists from your iTunes library to your device!

Conclusion: This concludes our quick “How to Put Music on Samsung Galaxy” tutorial! We were only able to introduce you to two different methods today, but they’re really all that you need when it comes to transferring music from device to computer like this. Of course, if you want maximum convenience then the one that we recommend that you choose in the end is the iMusic software. Which, unlike its manual counterpart, not only offers a sleek and intuitive interface but also convenient tools and options that speed up the process and make it absolutely fail-safe for beginners and experienced users alike!