Here you can download TED videos, TED TV or TED talks for iPad, iPod and iPhone. The TED downloader allows you to download any online videos in a click.

TED is an organization that posts short, powerful talks (usually less than 18mins long) online for free distribution. It allows you to download a TED Talk from the website in MP4 or MP3 format but with many limitations. If you want to download TED videos in batch or download TED videos to more formats, you need to get a TED downloader. In this guide, we will introduce you to the best solution to download TED videos, TED TV or TED talks for enjoying on iPad, iPhone or iPod.

Part 1. How to Download TED videos with The Best TED Downloader

iTube HD Video Downloader is the highly recommended tool we use to download TED Talk videos. This TED Talk downloader helps you to download video from TED, YouTube and other 10,000+ video sites in one click. Honestly, this wonderful and innovative TED Talk video downloader is designed to make downloading of all sorts of audios and videos from any source and conversion to iPad, iPhone and iPod as easy as a breeze.

How to download ted video with iTube Ted Downloader

First of all users have to visit iTube HD Video Downloader official website to download ted videos with this ted videos downloader for windows or mac. Once downloaded launch it on your computer.

Now users have to visit ted.com website and search for the ted talks which you need to download on your computer to watch offline. After finding videos play them. Once videos are started playing, you can see a download button in the right top side of videos. Click on this button, it will show you different qualities and select quality now. 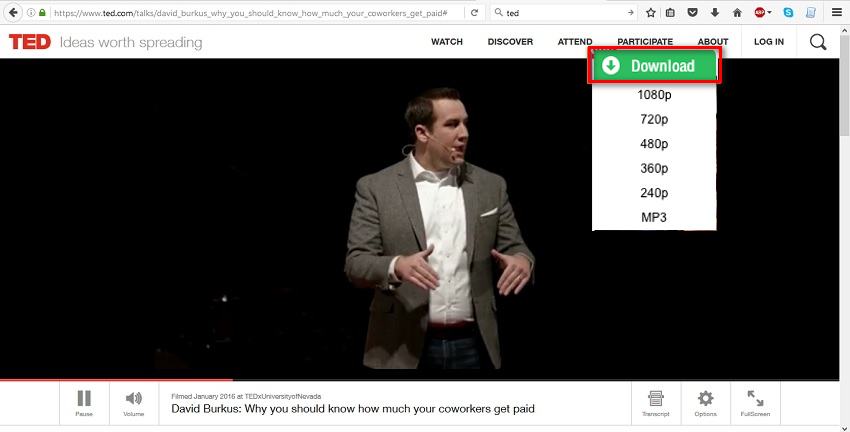 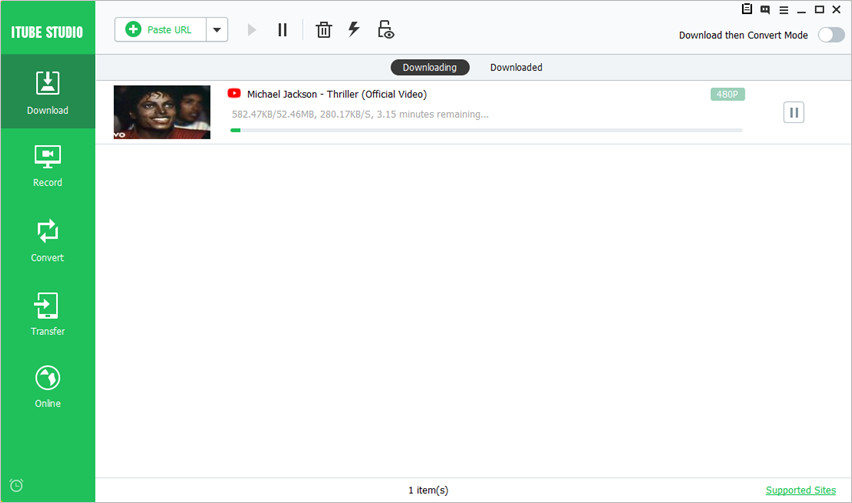 After finishing of downloading videos, it will save video to your computer. You can find videos in the finished tab now. Right click on Downloaded videos.

Note: If you want to save the TED videos into other formats or you just want to download TED talks MP3, this app will be a great help. Switch on “Download then Convert” option in the top right corner of its interface to select your desirable format first, and then start to download TED videos you want by following the steps above. By this, you can download and convert TED videos into formats like MP3 at the same time. 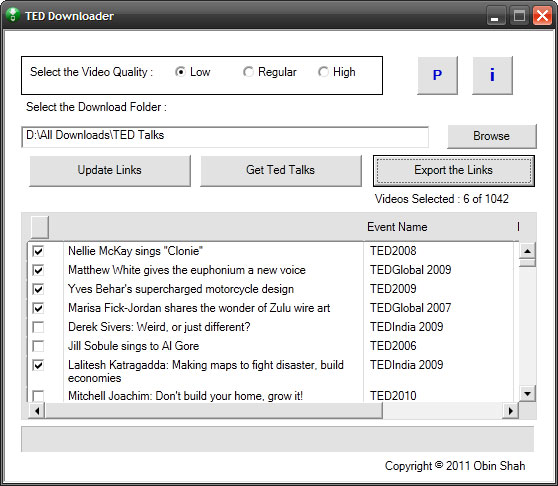 If you are want to download one Ted video from the ted website, it’s not that much hard you can directly do it from the ted website itself. To download ted videos go to ted website and play any video which you like. Once you videos are started playing, you will see different option such as “Watch later” “Favorite” “Rate” and “Download” at the right middle side of videos. You need to click on “Download” button here. 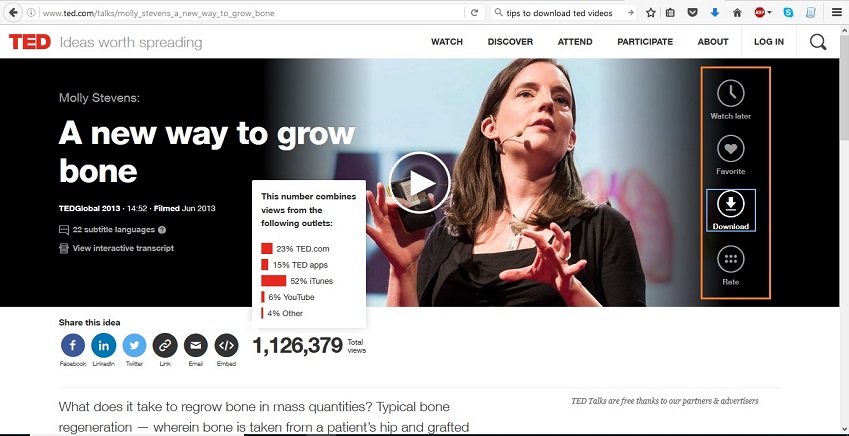 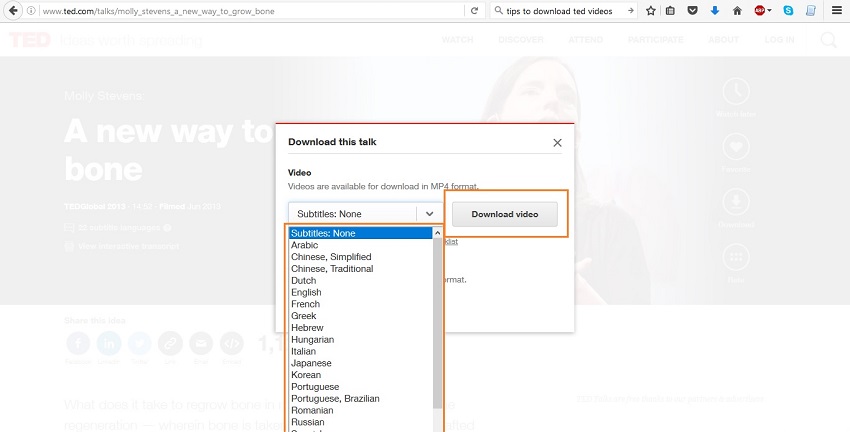 The full meaning of the word TED is Technology, Entertainment and Design and majority of the TED talks on this platform fall within the aforesaid categories. Now TED has widened its spotlight to include ideas from other fields including cultural academic and scientific topics. TED app allows you to watch oodles of videos featuring talks from famous and well remarkable people on your iPad, iPhone or iPod touch. TED is an official application that will enable you to access speeches that cover wide range of subjects.

TED, driven by their slogan “Ideas worth spreading”, is a nonprofit nonpartisan media organization that posts short, powerful talks (usually less than 18mins long) online for free distribution. The organization began as a conference back in 1984 where Technology, Entertainment and Design elites came together. The main conference is still held annually since 1990. It was held yearly in Long Beach as at 2014 and up to date in Vancouver, BC, Canada at the Vancouver Convention Center. The talks are also live streamed throughout Asia, North America and Europe.

Initially the conference primarily focused on technology and design owing to its Silicon Valley origins. Richard Saul Wurman, an architect and graphic designer initiated the TED movement and organized the first conference with Harry Marks in 1984. It featured presentations by the renowned mathematician Benoit Mandelbrot as well as demos by Philips & Sony and Apple on their products; compact disc and Apple Macintosh computer respectively. The first conference turned out financially unsuccessful. It took six years for a second TED conference to be organized that is in 1990. After which the event received significant recognition as well as new attendees thus it was moved from California State University Monterey Bay to Long Beach, CA in 2009. The organization today covers almost all topics ranging from science to business to art and in over 100 languages. TED has had quite a number of prominent personalities on its roster of presenters including Al Gore, Bill Clinton, Bono, Bill Gates, Larry Page and Billy Graham among others.

Chris Anderson, former computer journalist and magazine publisher, is the current TED’s curator. He officially took over the role in 2002 after having acquired the organization through his nonprofit, The Sapling Foundation in Nov 2001 for £6m. Some of the organization’s most notable programs and initiatives include TED Prize, TEDx, TEDGlobal and TED Fellows. The TED Prize was first introduced in 2005 where up to 2010 three winners got $100,000 and a wish to change the world. The prize money was increased to $1 million in 2013. TEDx on the other hand are independently run TED-like events that be held by anyone who obtains TED’s free license agreeing to follow set principles. One may seek commercial sponsorship or charge admission fees to cover their cost however, TEDx events are primarily nonprofit.

Lastly, attendance and membership fees have varied throughout the years due to several reasons. The annual membership package usually includes networking tools, club mailings, conference DVDs and most importantly attendance of the conference. Charges for the upcoming 2017 conference stand at $17000 per attendee. These revenues in addition to licensing fees, corporate sponsorships, and book sales help run the organization.

How to Download Myspace Videos and Songs Easily and Quickly