Here are the top 5 Apple music recording software programs that you can use to record music on your Mac PC or iOS mobile devices with ease.

Is there any good Apple music recording software?

If there ever comes a time when you need to record music from websites or applications such as iTunes, you need to know the best software programs to use for this purpose. There are many reasons why you may want to record the music. It could be because you want to save some money if you are a professional musician, or you may be doing so in order to listen to the music on your phone or computer conveniently without worrying about slow internet connection speeds. To help you record music on your Mac PC with ease, here are the top 5 Apple music recording software programs that you can use.

With iMusic, you can record unlimited audio from sites such as YouTube, Napster, Spotify, Rhapsody, MySpace, Yahoo Music, AOL Music and more in just a single click. It also allows you to burn recorded music to CD with absolute ease. When you are watching a video online and you have this application installed on your computer, a Record button will appear. You simply need to click that button to capture the audio from the video that you are playing and save it in high quality MP3 format.

One of the things that you will like this Apple music recording software is the fact that it does not interfere with the quality of audio that is being recorded. It records music with 100 percent original quality. You can use it to record anything that you hear from your Mac PC. If you record music from the internet, it will be saved complete with tags and can be played on portable devices. It comes with an intuitive and straightforward user interface that allows you to navigate around it very easily. You will be assured of great recording quality with this application.

iMusic - Best Apple Music Recording Software You Deserve to Own

Download and install iMusic on your computer. Launch it and click the "GET MUSIC" menu on the top of the software. Next, click the "RECORD" button.

Step 2. Start to Record the Song

Tips: you can try the Record feature while playing songs in iTunes radio station, Spotify, BBC radio stations, and so on. It works perfectly.

Click "LIBRARY" menu, then the record icon on the left side to check out the recorded songs. To add them to iPhone, iPod, iPad, and Android phones, check recorded songs > click export icon > select device to transfer (a device should be connected to the computer first).

This is one of the Apple music recorder applications that will allow you to record the sound you hear on your Mac PC with absolute ease. It allows you to record audio from any external or internal sources, for instance a microphone, sound card, among others. The recorded audio files can be saved in a wide range of formats, including MP3 M4A, M4R, AU, AC3, just to mention but a few. You do not need to be a pro at sound recording to work with this program. It just takes a simple click to capture sound, voice, music and any other audio from applications and online sources.

One of the features that you would like from this software is the built-in schedule function that enables you to create scheduled tasks with absolute ease. You just need to set it the way you want for it to automatically start recording or stop recording. You will find this design to be very convenient especially if you have other things to do and you need to record music at the same time. This application also offers the ability to split recordings into separate music tracks automatically. It also filters out ads between tracks automatically.

Audacity audio recorder enables you to record music from different websites and applications. It is not only loaded with powerful recording features, but also amazing audio editing and exporting tools that will work together with multimedia capabilities of your Mac PC. Recording with it is as simple as hitting the record button that is found on its interface.

Audacity audio recorder is very professional Apple music recording software. It features a really simple interface that would not give you trouble understanding like some professional apps. After recording the audio, you can edit with absolute ease using this application. You simply need to drag it to the interface of this application to open and then do what you like. Some of the things that you can to your audio file include adding fade ins and fade outs or saving it in a different format. Audacity also supports ID3 tags that allow adding of meta data that you would like to be saved with the tracks. 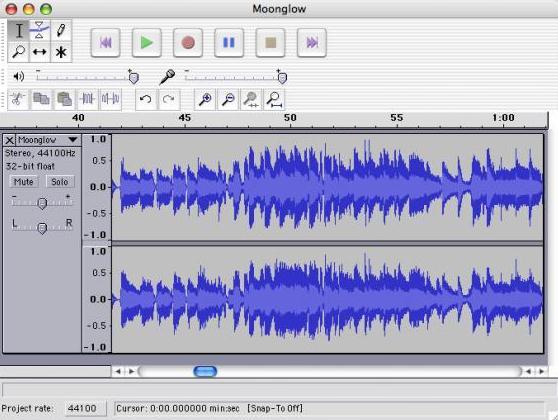 This is a whole music creation studio that features a complete sound library. It includes presets for voice and guitar, software instruments, virtual session drummers, and many other amazing features. It has a very intuitive user interface that allows you to record music with it easily. Even if you have never used a music recording application before, it will not take you long to learn how to use this application like a pro.

Apple GarageBand has tons of helpful recording as well as editing features. You can edit the music that you have recorded to the right note and decibel using this application. If you sense any rhythm issues after recording music, you can fix them with absolute ease using this application. It also has audio effect plug-ins that allows you to tweak sound and make it smooth and appealing to listen to. If you have music that you would like to share with friends, family, and the internet community at large, this software lets you do so easily.

This Apple music recorder allows you to record music directly from a CD player, Mic, web pages and line-in devices. You can save the recorded files in a wide range of formats, including WAV, MP3, AC3, M4A, OGG, just to mention but a few. You can also use this application to record digital sounds from applications such as Skype, FaceTime, iChat, and many more with absolute ease.

Onde audio recorder supports batch recording. You can record more than one audio file simultaneously with it. When using this application, you do not have to worry about the quality of the recorded file because it records audio with 100 percent original quality. It has a simple interface that will not give you any trouble when you are learning how to use it.

How to Record Music from Internet on Mac, Windows, or iPad