MP4 is undoubtedly the most popular video format and you can get MP4 videos almost anywhere like online video sites and camcorders. Sometimes you may need to convert MP4 to MPEG so that your computer, DVD player, or video editing program can handle the format. Here I'll show you how to convert MP4 to MPEG-1 or MPEG-2 with ease.

In fact, it's quite easy to convert between different video formats, of course including MP4 and MPEG. All you need is a right program like Aimersoft Video Converter Ultimate, with which you can fast convert MP4 to MPEG files without any quality loss. It's fully compatible with Windows 10/8/7/XP/Vista. And if you're using a Mac, you can just get Mac video converter to convert MP4 videos to MPEG on Mac (newly macOS 10.15 Catalina included).

The steps to change MP4 to MPEG in both the Windows and Mac operating systems are almost the same. Here the detailed steps to perform the conversion in Windows are described as an example. You just need to make sure you download the right version.

After installation, run video converter and click Add Files to load the MP4 video files. Or you can directly drag the MP4 videos to the program. Batch process is supported, so you can add several MP4 files and convert to MPEG at one time.

Before starting to convert MP4 files to MPEG, you can use the built-in editor to personalize your videos so as to get exactly what you need. Simply click the 3 editing icons below each video thumbnail to enter the editing windows. Here you can crop, cut, rotate video, and apply effect, add watermark and many others to your video. 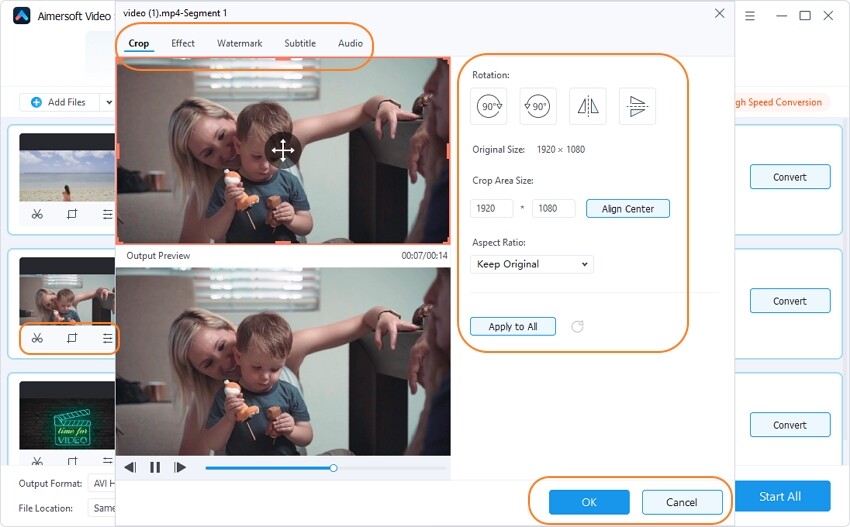 Next, select a proper output format from the drop-down list of Convert all files to. Choose MPEG under the Video tab. You can set the output path from Output Folder to save the converted media files. 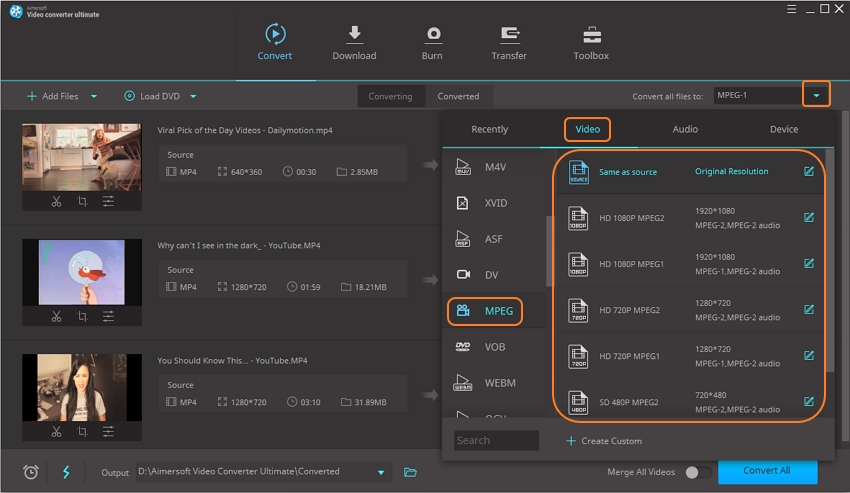 Finally, click Convert All to start converting your MP4 files to MPEG-2 or MPEG-1. The conversion process and the remained time will be showed on the main window of the converter. When it's over, you can go to your destination folder to find the MPEG videos or click Converted tab to locate them. 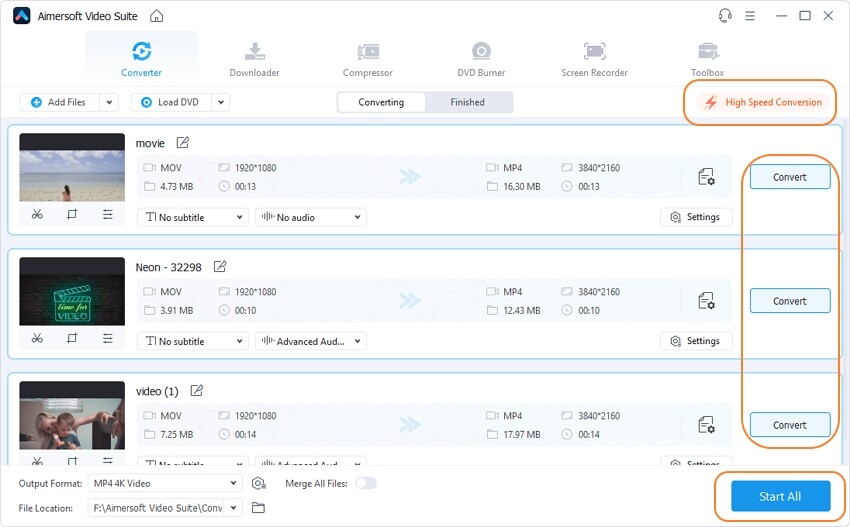 This part deals with 2 online MP4 to MPEG converter. Let's get to know them.

To ease out the conversion of MP4 to MPEG, Movavi Converter is a great option to think of. It is one of the considerable means of converting the file and doesn’t budge an inch to the quality of the video at all. It allows users to make due editions on the video file, thoroughly compress it and trim them according to customer’s need. Also, users can enjoy the liberty of performing batch conversion on multiple files. 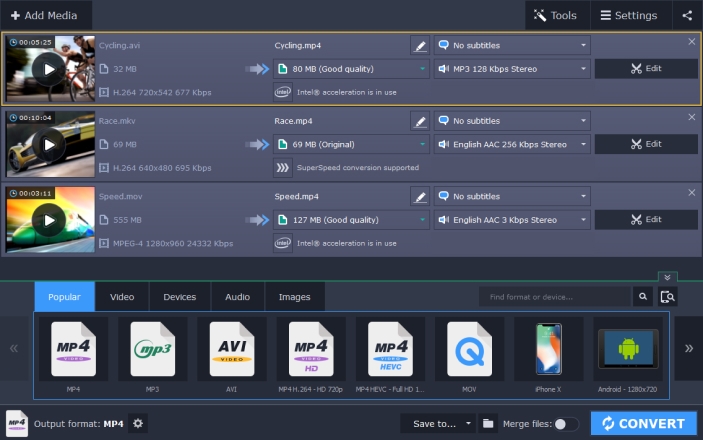 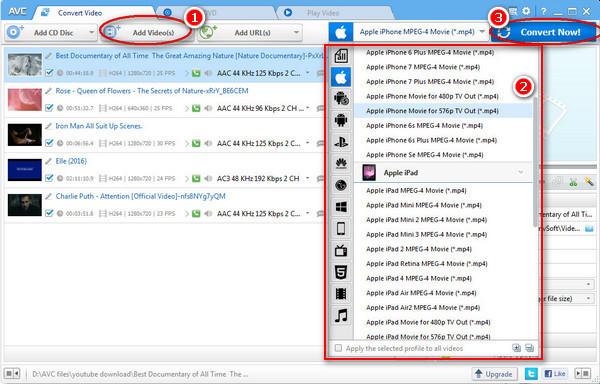 Wondershare media.io is one of the striking methods users can look to converter MP4 to MPEG online. Any layman or novice can access its simple functionalities without having to perform any intricate set of instructions. Media.io is designed with simple functionalities and interface that is very much friendly with any novice or pro too! It also offers free conversion for a variety of file formats such as MPEG, MP4, DIVX, MOV, AVI, FLV etc. Users can enjoy the leverage of downloading unlimited files speedily. 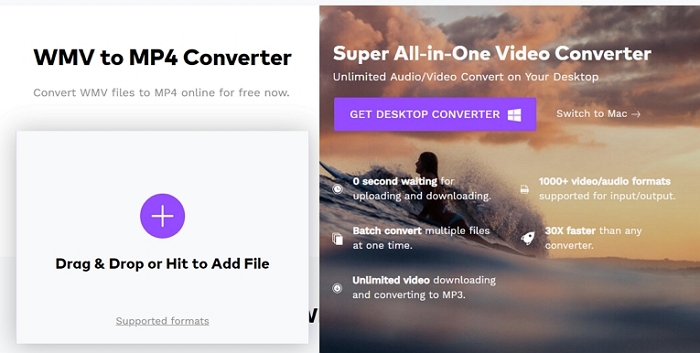 Internet has a wide range of converters but to fetch for a greater quality output, users can consider using Convert.Files – an effective online converter that handles conversion of the popular file formats. Whether the format is of audio category, video, image or font, Convert.Files is built to be compatible with most of them. It can easily switch the MP4 file format to MPEG. What’s unique about this converter is that it has an active customer support base that can solve queries very quickly.

To convert files formats for free, Aconvert is a best MP4 to MPEG converter. It manages to convert videos as well as dash the files with great features. Users can be ensured of setting duration time, customizing duration of video, refocussing the split sections in a convenient manner. Moreover, users can dash in subtitles, add metadata over the desired files too.

The MPEG4 and MP4 may have a “4” digit in common but in actuality they significantly have different implication and meaning.

On one side, the MPEG4 is a video encoding algorithm that briefly defines how to compress audio as well as visual digital data. In a way, MPEG is a compression method that is aimed for the encoding of video/audio formats. It is divided into smaller parts that are known as MPEG-4, Part 2, MPEG-4, and part 10, MPEG-4 Part 14 etc.

MP4 or MPEG-4 Part 14 on the other hand, are one of the mainstream formats that manages to work in all types of media devices, PC, phones etc. This digital container format is capable of storing video and audio data like the subtitles and still images etc. MPEG-4 Part 14 is a segment of the MPEG-4 compression algorithm.

3 Quick Ways to Download Dailymotion to MP4 without Losing Quality

How to Convert VRO to MP4 on Windows/Mac