MKV is a container format that like AVI, MP4 or ASF that can store various video, audio, picture or subtitle tracks inside a single file. Since it is an open standard free container format, nowadays we can easily download various sorts of MKV files online free of charge. However, MKV format is not supported by popular devices like iPad, iPhone, PSP, etc. while MP4 format is well supported by many portable video players. That's why so many people are asking how to convert MKV to MP4. This article will introduce the best MKV to MP4 converter and some online converters. Keep reading!

To convert MKV to MP4 without limitation, what you need is a third-party program that can accomplish the task. Here Aimersoft Video Converter Ultimate is highly recommended as the best MKV to MP4 video converter. With it, you can easily and quickly convert MKV files to MP4 videos while keeping the same quality. Besides MKV and MP4, it can also convert among almost all popular video/audio formats, including MOV, AVI, WMV, FLV, ASF, MPG, MP3, OGG, WMA, etc. More than video conversion, let's see some other features in it:

How to Convert MKV to MP4 with Aimersoft Video Converter Ultimate

After downloading the Aimersoft MKV to MP4 converter, install and run it. Then follow the guide below to convert your MKV video files to MP4 in just a few mouse clicks!

Click Add Files button to add MKV video files from your computer or camcorder (or other devices like USB, cell phone, etc). Since this program support drag-and drop, you can simply drag MKV files to it. You can add multiple files to save your time for this program supports batch conversion.

Click the Convert all files to option on the top-right corner. Next select Video > MP4. Also choose a resolution for it according to your need. 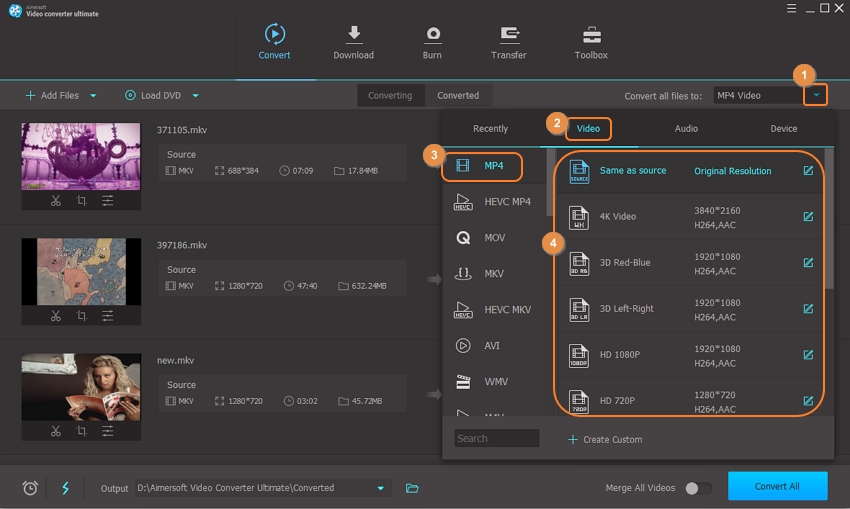 After all necessary settings and editing, simply press the Convert All button to start the MKV to MP4 conversion. Within a few seconds, you can get the converted MP4 video files on the Output folder. Or you can click the Converted tab to check the MP4 files. 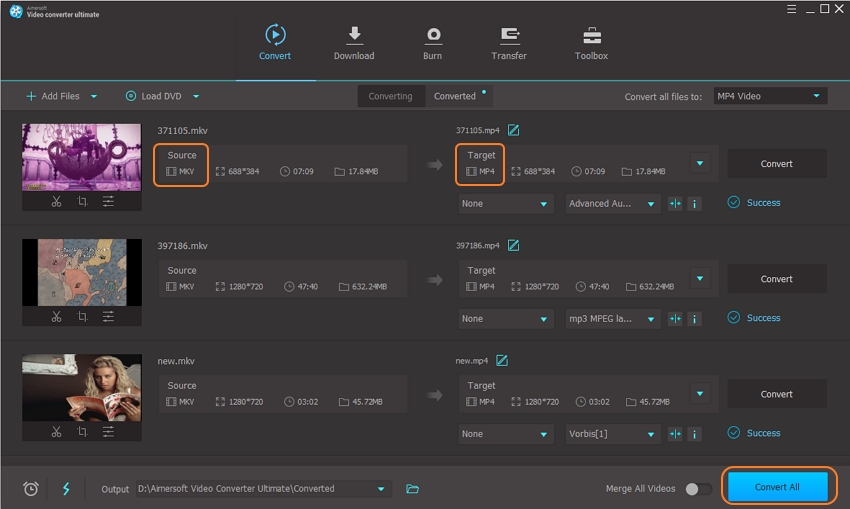 That's it! That is how you can convert MKV to MP4 on Mac or PC. Free download Aimersoft Video Converter Ultimate below if you haven't had it. You will be happy with this professional video converter!

Online MKV to MP4 converter works from your system browser and need no software installation. These programs are free to use and support limited conversion.

Earlier known as Media.io, this MKV to MP4 online converter supports a wide range of audio and video formats for conversion. The program needs no installation or registration and is free to use on your Windows and Mac system. Up to two files at a time can be processed and the converted videos can be saved to your PC or Dropbox account.

How to convert MKV to MP4 online with Online Uniconverter

Step 1: Drag and drop the MKV file to the interface. You can also click on the +Add your files button to import the video.

Step 2: At Convert to: tab choose MP4 as the desired format. Click on the Convert button

Using this online converter your videos in MKV format can be converted to MP4 in decent quality. The simple interface of the program makes it easy to use for all types of users. Popular video formats are supported by the program for the conversion. The converted file can be downloaded to PC. Local, as well as online files, can be added to the program.

How to convert MKV to MP4 free with Online Convert Files

Add local or online file to the program interface > Select MP4 at the Output format tab > Click on the Convert button.

Files on computer, URL, and cloud can be added to this online program for conversion to the desired format. The tool allows adding a maximum of 5 files at a time with a combined size of 300MB. An array of audio and video formats is supported by the tool and after the process, the files can be downloaded to your system.

How to convert MKV to MP4 free online with FreeFileConvert

Add local, URL, or cloud file to the program interface > Choose MP4 as the target format > Click on the Convert button. 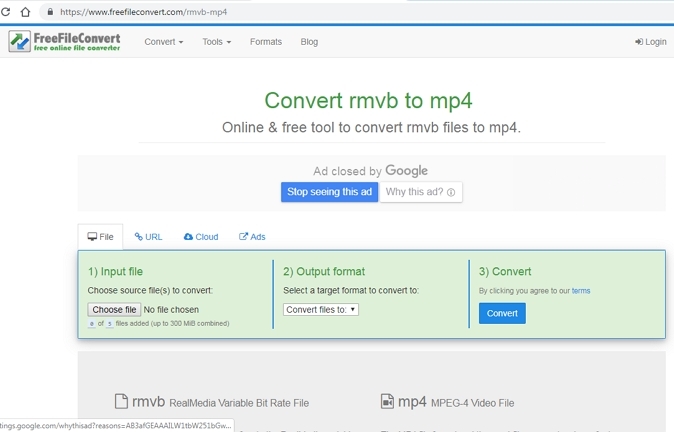 MKV is yet another video format that is worth checking out. Like MP4, MKV has its own following among video, movie, and film creators worldwide. Many users say that MKV is very similar to MP4. However, it is first important to know the detailed descriptions of these two video formats before arriving at any conclusions.

MKV is a video format created by Matroska, a non-profit organization specializing in creating video-related software. The intention was to create an open source video container file that works very similarly to MP4 and other containers. MKV is very popular because it is widely used for HD or High Definition videos.

MP4 is the industry standard video container system that has been adapted in the world. As such, many of the other video file formats are being compared to it. When it comes to video quality and file compression, MP4 remains to be the best among the rest. MP4 is the same as the MPEG-4 file format that was released by the Moving Pictures Experts Group and standardized by the ISO.

By simple comparison, MP4 is the deemed standard format for video files while MKV is an open source video file that works very similar to it. As a matter of fact, the video outputs between the two file formats are almost the same that users rarely spot any disparity.

However, the main difference lies upon the user's application of these video formats. For portable devices, MP4 is the better choice because of its very light and very compressed nature. However, if you're playing videos off the internet, MKV is more ideal. This video format is ideal for video streaming because it efficiently maximizes bandwidth and requires a rather low storage space when playing the file.

How to Use FFmpeg to Convert Video to MP4

How to Convert M3U to MP4 Easily on Mac/PC

How to Convert MP4 to QuickTime Supported Format