How to Convert MP4 to OGV on Mac/PC Online

With the increasing popularity of HTML5, the use of OGV is also increasing. An OGV is a lossy video format codec with Theora and it is compatible playing with all popular browsers like Google Chrome, and Firefox. The OGV codec is majorly seen in webpages and thus if you wish to use and embed your MP4 videos of high quality in HTML5 page and want to make it more accessible to browsers, need for converting MP4 to OGV format arises. Know more in detail about MP4 to OGV converter below.

Part 1. Fast Way to Convert MP4 to OGV on Mac/PC

OGV conversion can be a difficult task if the right type of software is not used. So to ensure that your MP4 to OGV conversion takes place in a quick, hassle-free and high-quality conversion, Aimersoft Video Converter Ultimate is the program to install. In a few simple steps, you can download and install the software on your Windows and Mac PC after which it is ready to convert your files without any restriction. Over 500 formats are supported by the tool for the conversion in lossless quality including MP4 to OGV. Batch processing allows converting multiple MP4 files in one go. See more features below:

Download, install and run Aimersoft Video Converter Ultimate on your Mac/PC. Local files can be simply dragged and dropped or can be browsed and added by clicking on the +Add Files button. Add multiple files for batch processing. Files from devices can also be added directly to the interface through drop-down options at +Add Files.

File editing can be done by selecting one of the editing icons under the added video thumbnail image.

The list of supported formats can be checked by opening drop-down options at Convert all files to: tab. Select OGV from the Video list as the desired target format. 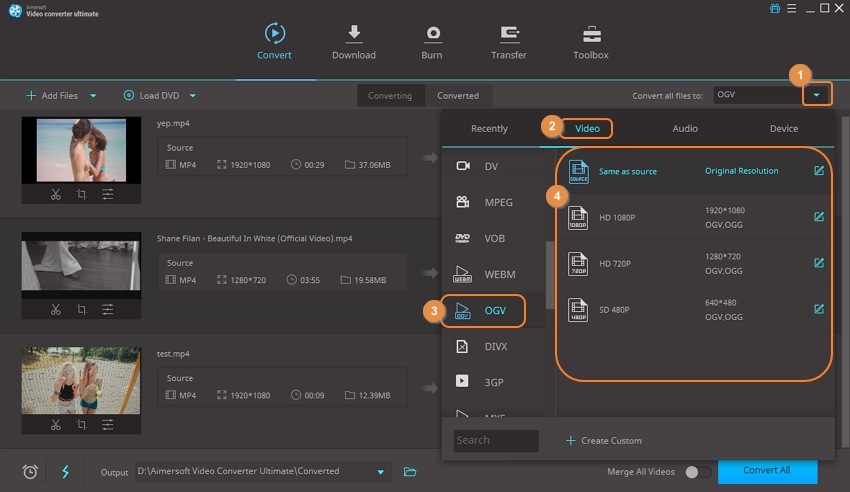 Click on the Convert All button to start the MP4 to OGV process. The converted files get saved at the location selected at the Output tab. The files on the software interface can be managed from the Converted tab. 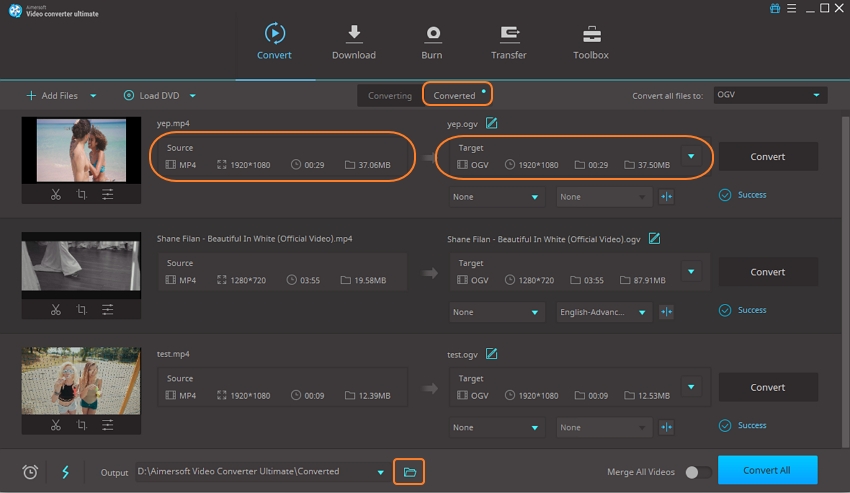 See, with 3 easy steps, you can convert MP4 to OGV quickly. Free download Aimersoft Video Converter Ultimate on your Mac or Windows PC. Converting MP4 to OGV can be a very simpel job!

Part 2. How to Use FFmpeg to Convert MP4 to OGV

FFmpeg is a free to use software project that contains a number of libraries and programs that facilitates handling multimedia files including video, audio, and others. This command-line based cross-platform program allows performing an array of functions including file conversion, recording, streaming, and others. So for converting MP4 to OGV in decent quality, FFmpeg also processes to be a good option.

Step 1: Run the FFmpeg on your PC. Copy the video to be converted to the bin folder. For instance, testfile.MP4 is copied to c:\ffmpeg\bin

Step 2: If you are working on the Windows, open the command prompt (cmd.exe). Next change to the bin directory by typing cd \

Step 3: Next you will see c:\ffmpeg\bin. Now to convert the MP4 video to OGV format, enter the command below.

There will be two files in your bin folder now.

An online tool for converting your MP4 videos to OGV can also be used. One such decent program that works from your Windows or Mac browser is Online UniConverter which was earlier known as Media.io The tool is free to use and need no installation or registration. The conversion process is quite simple where you just need to add the desired MP4 video to the interface and then choose OGV as the output format. The files once converted are available for the download on your PC from the program interface itself. If needed, the converted files can also be saved directly to your Dropbox account. Two files at a time can be added to the program for the conversion.

Guide to use MP4 to OGV converter online

Step 1: Launch https://www.media.io/convert/MP4-to-OGV.html on your PC browser. Click on the +button to add local MP4 video to be converted. You can even drag and drop the file.

Step 2: Select OGV as the target format from the Convert all file to tab. Click on the CONVERT button to start converting the added MP4 videos to OGV format.

OGV is a lossy video format codec that is popularly used for playing webpage videos that use HTML5 tag. A DirectShow codec pack is provided by the developers of the OGV format that facilitates the software developers to include the OGV file support in open-source as well as commercial applications. This codec format with Theora can be played on Google Chrome and Firefox and with no flash container.

Though OGG files may be used for both audio and video files, it is now generally used to represent only the audio files. OGV, on the other hand, is used only for the video files. So it can be broadly said that OGG is an audio file while OGV is a video file.

How to Convert MP4 to OGV on Mac/PC Online

How to Convert/Download Twitch to MP4 Quickly

How to Convert VHS to MP4 Easily

How to Convert XviD to MP4 Format in Windows/Mac