How to Convert F4V to MP4 Format in Windows/Mac

F4V is a flash media container format which enables embedded Shockwave. F4V can be considered as an upgraded version of the FLV format which is also a flash file. An F4V file can be accessed only using a Flash Player and have limited compatibilities. Thus to make your F4V files accessible through all types of players, devices, and editing programs, conversion to a more popular format like MP4 is required. Using a professional tool you can convert F4V to MP4 in a hassle-free manner.

Aimersoft Video Converter Ultimate is a versatile video toolbox that allows video conversion between arrays of formats in addition to other functions. With the program, you can easily convert F4V to MP4 and convert multiple files at a time which saved efforts and time. Video editing features like trimming, cropping, cutting, adding watermark and others are also supported.

Run Aimersoft Video Converter Ultimate on your PC and load the F4V files to be converted by clicking on the +Add Files button on the Convert tab. Drag and drop also function here. Multiple files can be added for batch processing.

Bonus: Video editing can be done by using one of the editing icons present under the thumbnail image. 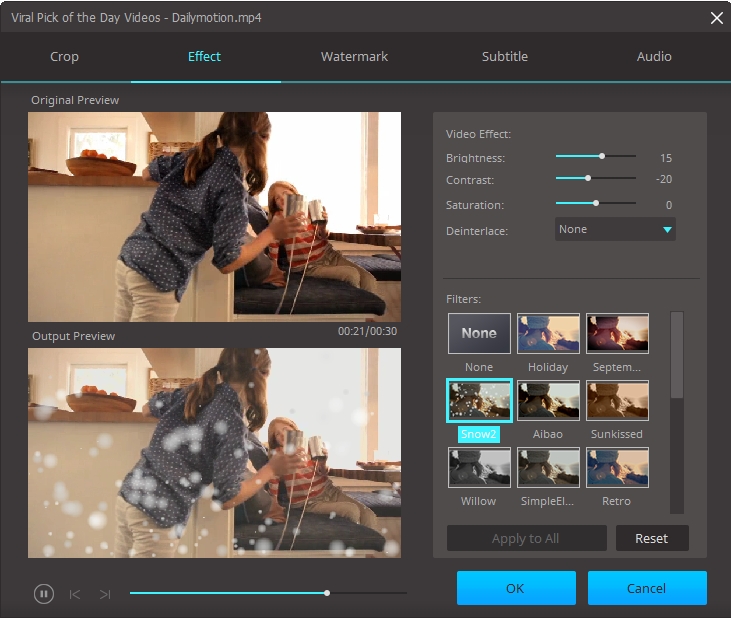 02 Choose MP4 as the target format

At Convert all files to: tab on the top-right corner click on the drop-down icon and a new pop-up window showing supported formats appear. Choose MP4 from the Video list. Also select file resolution. You can follow the screenshot below. 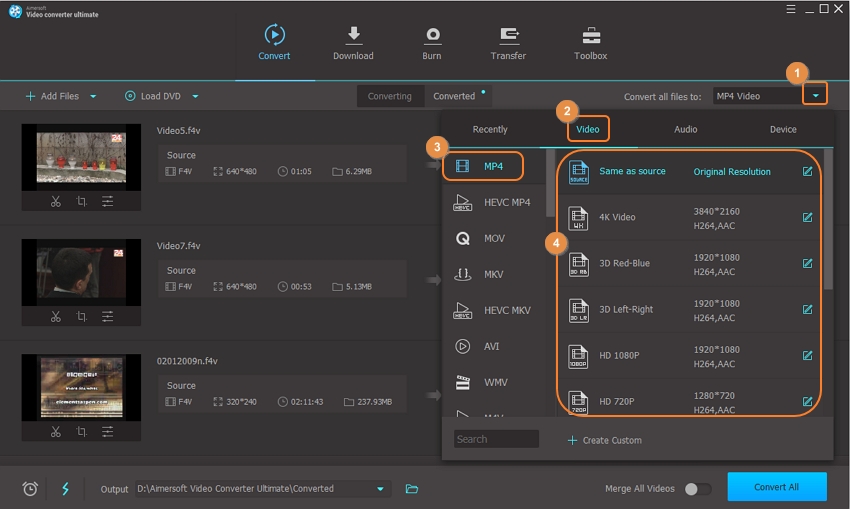 Click on the Convert All button to start processing the added F4V files. The converted files will be saved at the location selected at the Output tab. Or you can check the MP4 files in the Converted tab. 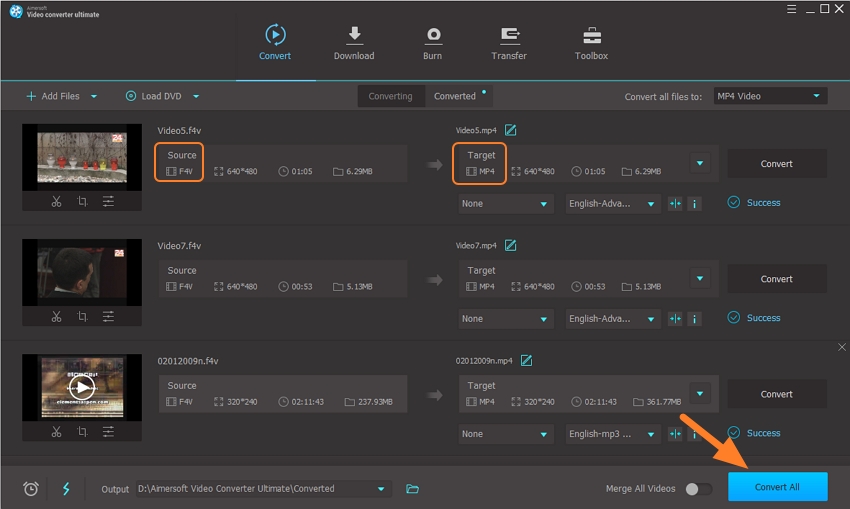 If you do not want to purchase software, you can opt for F4V to MP4 freeware tool. One such decent program is Wondershare Video Free Video Converter that works on Windows as well as Mac system. The software supports conversion between arrays of formats including F4V to MP4. The converted files are in good quality that along with batch processing makes the conversion process quick and hassle-free. File editing options are available for creating customized videos. Let's see the steps below:

Step 1: Download, install and run Wondershare Video Free Video Converter on your PC. Click on the +Add Files from the main interface to browse and add F4V files to be converted.

Step 2: Choose MP4 as the target format from Convert all files to: tab on the top-right corner.

Step 3: Choose the output location of the converted file and click on the Convert All button.

Note: Free video converter always has limits for video size, length, output format and quality. Learn them before you get started. 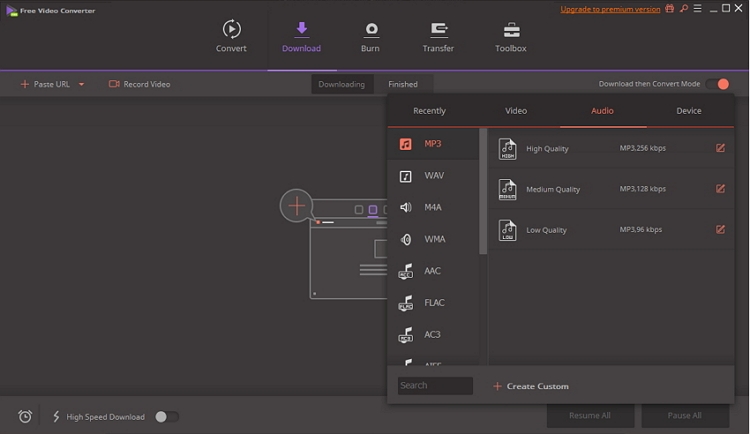 FLV and F4V are the two major formats in which flash files are saved. These files are embedded within the SWF files. In FLV format, the video and audio data are encoded in the same way as they are in the SWF files. F4V, on the other hand, is a format that is based on the ISO base formats.

FLV format supports H.264 video and AAC audio whereas F4V offers better support to ACC and H.264 than FLV format. FLV format can be accessed and viewed using Adobe Flash Player on all popular browsers and platforms. F4V, on the other hand, is not available on the majority of the Adobe Flash Player Plugins.

Thus it can be concluded that FLV is the preferred choice of the users and has better compatibility while F4V is the latest and updated version that is not yet developed fully and have limited capabilities.

How to Convert H.264 to MP4 Video with Original Quality

How to Extract Sound from MP4 Video without Losing Quality

How to Convert MP4 to iMovie (iMovie 11)